Accused of ‘Abusing Trust,’ Coinmarketcap May Now Let You Vote for New Listings

Cryptocurrency monitoring site Coinmarketcap appears to be mulling the idea of allowing users to vote on which assets it should track.

In a Twitter survey released September 12, the site, which has become a stalwart reference resource for cryptoasset prices and other related data, asked followers whether they “would be interested” in influencing future listing decisions.

At press time, 60 percent of the nearly 5000 respondents had accepted the offer, with 30 percent claiming they had no interest in doing so. A mere 10 percent said they would not like to have the opportunity.

Coinmarketcap testing the water comes as the cryptocurrency industry continues to expand despite an overall bear market persisting throughout the year. The site’s listings currently track 1944 assets. 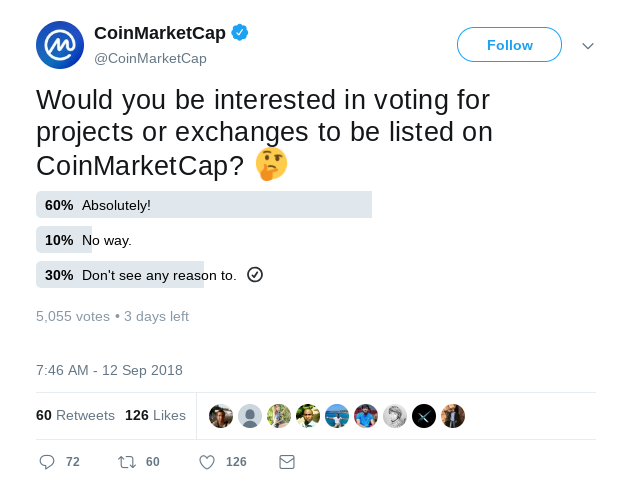 Selecting which assets to list has not always been a straightforward process for cryptocurrency businesses.

According to one coin’s developer, the world’s largest exchange by volume had demanded he pay 400 BTC, at the time worth $2.6 million, to list the asset, something Binance later denied.

Coinmarketcap has also seen controversy, removing South Korean exchanges from its price data due to what it claimed was excessive volatility in local markets in January this year.

Responding to the survey, the developer of Bitcoin Core coin BTCC known as Clashicly told Bitcoinist reform was urgently necessary to prevent “abuse” through listing decisions.

“If they don’t change their process or behavior they should be forked. However, that doesn’t address their dominant position in the ecosystem,” he said in private comments.

They are abusing the trust millions have in them. They should feel responsible for introducing some of the garbage in the ecosystem that has financially ruined millions.

Losses for investors of some assets tied to dubious issuers have been considerable, with the overall market index even for major coins now topping 80 percent.

“The majority of listings have strayed away from the spirit of cryptocurrencies and hurt many as a result,” Clashicly added.

[This] will result in the delay of mass adoption. The world doesn’t need 2000 crypto currencies.

What do you think about Coinmarketcap’s listings? Let us know in the comments below!