Anyone getting involved in cryptocurrency should be well aware that the emerging market carries its fair share of risk. However, popular San Francisco-based exchange Coinbase has taken it to another level by severely overcharging users debit and credit cards – reportedly upwards of 50x the correct amount.

Coinbase – one of the most popular digital currency exchanges – has admitted to accidentally draining users’ bank accounts by severely overcharging their past cryptocurrency purchases.

This news comes as some users have been taking to Reddit to report significant overcharges on their cryptocurrency purchases. User thepokernit reports being charged 17x the expected amount on a $1000 purchase, claiming the mistake has left him or her flat broke. User ipizi reports an even grosser case, being charged an astounding 50x what was expected — costing him or her $67k in total.

This isn’t merely a cast of Redditors throwing FUD or spreading lies, either. Justin_coinbase, an official member of Coinbase’s engineering team, has confirmed the serious issue on Reddit with the following message:

We are actively investigating some reports from our customers about unexpected credit or debit card charges appearing on their statements from previous Coinbase purchases. We can confirm that the unexpected charges are originating from our payment processing network, and are related to charges from previous purchases. To the best of our knowledge, these unexpected charges are not permanent and are in the process of being refunded. We are running joint investigations with all parties involved, and will provide updates as we receive them.

Justin ends his message by candidly stating, “I apologize for the trouble, we are working as quickly as we can to help anyone affected by this. Thanks!” 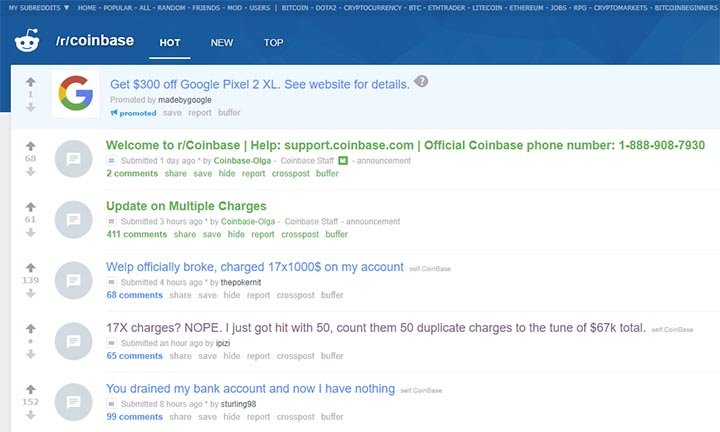 Another Coinbase support technician, Coinbase-Olga, has recently issued the following update on Reddit:

I spoke with the team investigating and we’re working on a more detailed post explaining the situation within the next 24 hours. We have confirmed that this is an issue occurring downstream from Coinbase, and we’re working with those parties to reach a resolution. We are doing all that we can to make sure that affected customers are made whole.

It’s safe to assume that anyone affected by Coinbase’s extreme error feels far from comforted by the exchange’s response. Even if the overcharges are refunded, some users who didn’t plan on having their bank accounts drained may be finding themselves in a dire situation.

At the time of this writing, Coinbase has yet to make an official announcement about the situation either on their website or via social media.

Coinbase is one of the most widely-used cryptocurrency exchanges in the United States, trading Bitcoin, Bitcoin Cash, Ethereum, and Litecoin. The exchange has more than 13,000,000 registered users.

Have you been overcharged on your Coinbase cryptocurrency purchases? Have you lost trust in the popular exchange? Let us know in the comments below!