Could Ford Enable Drivers to Pay in Crypto for Freedom of the Fast Lane?

A patent application filed by Ford describes a Cooperatively Managed Merge and Pass (CMMP) system that would allow drivers needing to travel quickly to use less congested lanes, and travel more freely, by paying other drivers in cryptocurrency. Other road users would move to slower moving lanes and allow a paying driver to merge or pass.

Primarily, the patent, filed on September 16th, 2016, describes a system for “vehicle-to-vehicle cooperation to marshal traffic” whereby compatible vehicles communicate electronically to identify traffic “cataracts”.  The “cooperative adaptive cruise control module”, once it has identified a traffic issue, can then coordinate with other cooperative vehicles to form a “platoon” which moves at a constant speed to effectively navigate the traffic cataract or congestion.

Compatible vehicles would be equipped with a “vehicle-to-vehicle communication module” and a “cooperative adaptive cruise control module”.

According to the patent Ford is aiming to solve an all too common issue:

“Traffic congestion occurs when one or more lanes of a multilane road are blocked, for example, because of a construction or an accident. The blocked lanes reduce the flow rate of vehicles through the section of the road with the blocked lanes. The reduced flow is compounded due to the psychology of human drivers who focus on their individual travel time preferences.”

In Ford’s proposed system, when a traffic cataract is identified, priority switches from individual travel time preferences to a group flow rate through the traffic cataract.

There is, understandably, no indication of whether Ford’s ideas could come to fruition, but Ford does also refer to “standard vehicles” with no communications systems, being “marshalled” by “cooperative vehicles”. 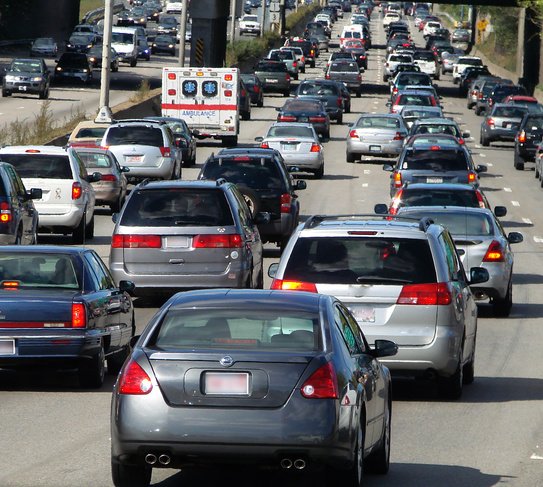 The patent also details an example system called CMMP, where cooperative “merchant” vehicles would receive a payment in units of cryptocurrency, or “CMMP tokens”, from “consumer vehicles” to allow the consumer vehicles to merge, pass, and have priority in faster moving lanes of traffic to reach their destination quicker.

Pay to Pass Other Drivers with Units of Cryptocurrency

The CMMP system could allow the “consumer” vehicle a certain amount of priority time based on how many CMMP tokens are spent.

“For example, a driver of a consumer vehicle which is running late for an appointment may request to pass any participating merchant vehicles for a duration of 10 minutes on a particular road or highway for 60 CMMP tokens, at a rate of 10 seconds preferential access per token.”

The full patent, filed with the United States Patent and Trademark Office (USPTO), goes into more detail about Ford’s proposed ideas and how they could, in theory, work.

How far off do you think “platoons” of connected vehicles navigating traffic congestion are? Would you pay other drivers for freedom of the fast lane?