They say that Bitcoin is volatile. But compare that to the savage landscape of altcoins in which one token can gain or lose 75 percent of its value in less than 60 minutes. That’s what happened to Digitex Futures yesterday–and it had to hurt.

Why Did Digitex Futures (DGTX) Fall Off a Cliff?

For an altcoin (or possibly sh**coin, the market is still trying to decide), the Digitex Futures community is stronger and more active than most. There aren’t many projects with 1.5 million on their waitlist or a 70K+ Telegram group. 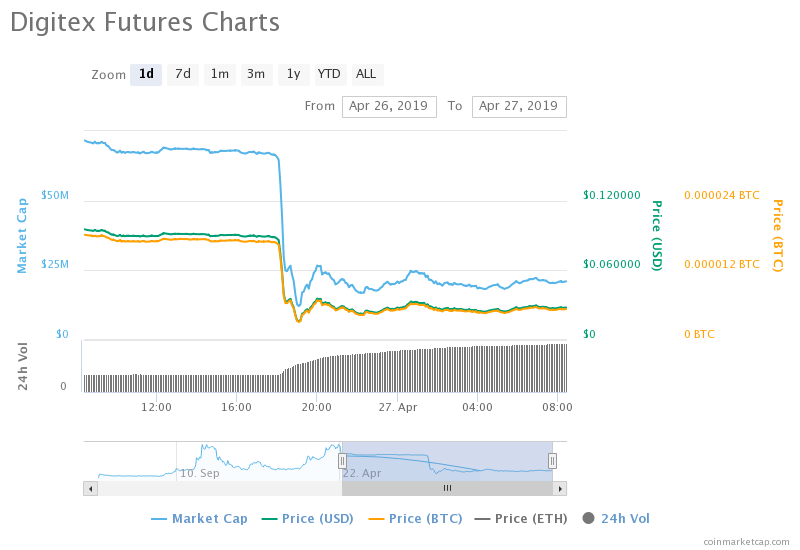 You have to admire the company for its impressive work as far as viral marketing is concerned. But marketing has always been a double-edged sword for this ambitious startup with pretensions of going head to head with BitMEX.

Yesterday, everything was going well as its community geared up for the April 30 launch–until all of a sudden, it was “postponed until further notice.”

CEO Adam Todd released a video showcasing the “piece of garbage,” riddled with critical flaws, that was the final build received from Spotware, Digitex’s development partner, whom he slated for their incompetence.

Within minutes of the news of the delayed launch, its DGTX token [coin_price coin=digitex-futures] tanked by over 70 percent, landing a place as the biggest loser of the day.

Fool Me Once Shame on You, Fool Me Twice…

However that saying goes, Digitex has weathered previous storms. The altcoin that has undergone marketing on steroids saw a previous tank after missing its first deadline for the Beta version in January.

The community reacted in a similar way then, albeit slightly less savagely the first time around. The token dipped to a low of around 3 cents before picking back up to as high as 14 cents during the second week of April. 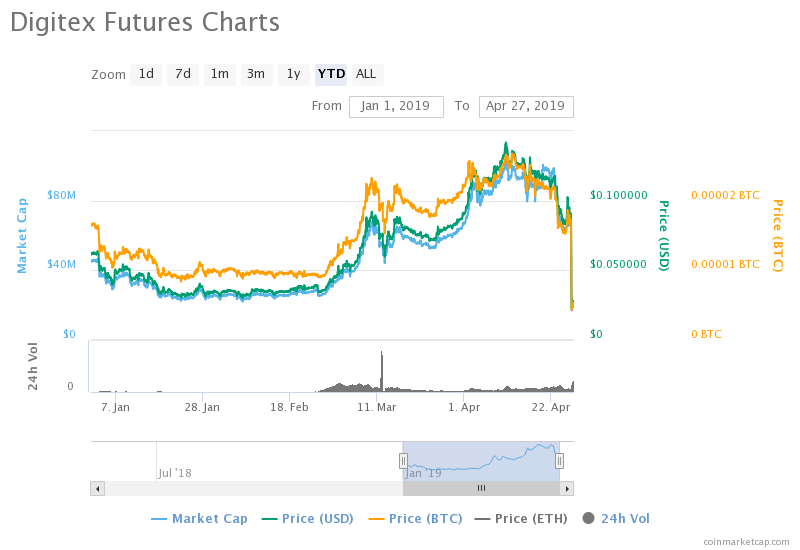 According to Todd, missing that deadline made him realize that development was going too slowly and the community was getting restless. So, he decided to part ways with his Dublin developers and outsource the final build to experts in the exchange software market, who guaranteed delivery of a robust working exchange that could be released to the public on April 30.

In his video, he explains that he knew that there were bugs but was assured that they were being fixed. However, just days before the launch, he was informed that the reported bugs were in fact “expected behavior” (i.e. non-fixable).

The final build had no trading volume, no ability to adjust leverage, didn’t display spot price of the underlying instrument, did not allow the trader to exit a position, and charged commissions (on a zero-fee exchange). In short?

What the f**k do I do with this? We’ve been delivered this piece of garbage that doesn’t even work. It doesn’t work.

What Does Spotware Have to Say About It?

In a statement attempting to clear its name, the Cyprus-based development firm had some accusations of its own. The company proclaims that it has a “huge amount of respect in the online trading industry” and that its products (including popular forex trading platform cTrader, have “stood the test of time.”

The company claims that the Digitex CEO was a desperate man and demanded a working product in an “unheard of a timeframe” but that they considered the project to “help the man stay out of trouble.”

Various further accusations abound and the mudslinging has (and most likely will) continue to go back and forth while DGTX investors grow ever angrier.

Where Does Digitex Go From Here?

The company is getting used to managing mismanagement. That’s hardly a point in its favor. But what still shines through clearly is the fact that this project continues to be something that people want (at least 1.5 million).

Like many blockchain projects, this latest PR nightmare shows a green and inexperienced team when it comes to managing development timelines.

It also highlights the perils of overhyping the launch of your product when you’re depending on the promise of a development team to get it right. As Blockstream CEO and hash cash inventor Adam Back points out, focusing on marketing rather than tech can be problematic.

I think the mistake forks focussing on marketing rather than tech, and doing it on a different token rather than on Bitcoin (eg as a side-chain, or other simple layer2). At the time I offered @rogerkver free architecture advice, FOSS & secure hardware at cost to make it happen.

Todd tells angry viewers that he will not stop until he gets this right. That he is setting up a new team and already has a lead developer in Serbia, and that he is going to personally oversee development as an “unyielding motherf**ker” of a boss until it’s done.

Despite the understandable barrage of abuse and outpour of rage on the company’s socials, there were also voices of support.

As someone experienced in the software development world I can understand what happened here.

I might be part of a minority group, but you still have my support and faith that you will deliver on your vision 👍🏼

Killing BitMEX may be a long way out of reach at the moment. Fighting for survival is now top of the new to-do list. It’s hard to tell right now whether Digitex will be one of the industry’s biggest ever comeback kids or just another footnote in the list of failed projects.

Will Digitex develop its product to compete with BitMEX? Share your thoughts below!