Dogecoin has become the unexpected new champion of the sudden cryptocurrency bull market which gripped the industry this week – thanks to Elon Musk.

In a series of surprising yet distinctly familiar tweets, Musk, who has hinted at his alleged fondness of Dogecoin, said the meme-based cryptocurrency was his “favorite” and described it as “pretty cool.”

Another post claimed Dogecoin “rules (sic),” while Musk also linked to an article about the current market from fake news outlet The Onion, commenting that “Dogecoin value may vary.”

All appearing April 2, it remains unknown whether Musk had a specific purpose in his advocacy, or whether the episode was simply a delayed reaction to an April Fools Day contribution by Dogecoin itself.

On Monday, developers had published a Twitter survey asking users to name a fictitious ‘CEO’ of the cryptocurrency, itself a long-running community in-joke.

Musk, who ‘competed’ for the position with Ethereum co-founder Vitalik Buterin, Litecoin creator Charlie Lee and Metal Payments CEO Marshall Hayner, easily won the run-off and inherited the title. However, from his Twitter account information, it appears he has already quit. 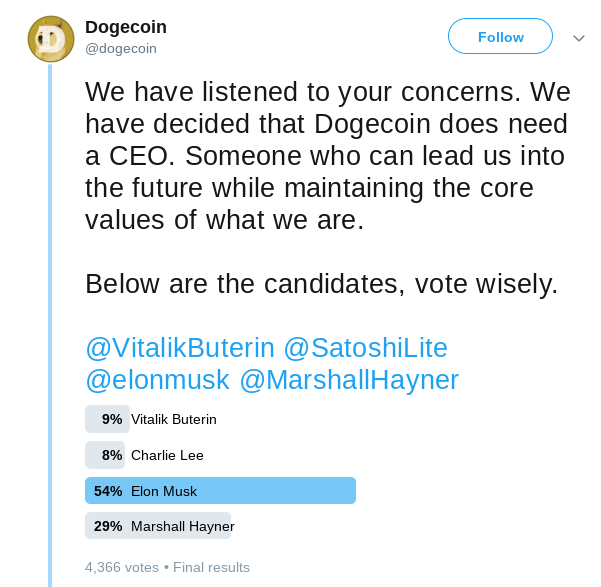 Regardless, the effect on Dogecoin was immediate and decisive: as of press time, the altcoin had made daily gains against the US dollar of almost 35 percent.

DOGE/USD currently trades around $0.0033, its highest since early November.

Elon Musk quickly gained the attention of the cryptocurrency community on Twitter, with traders extrapolating potential endorsement of the wider industry beyond DOGE.

Tuesday’s gains meanwhile were not enough to put DOGE back into the top twenty cryptocurrencies by market cap, with some other well-known assets delivering stronger returns.

Those included Bitcoin Cash, which advanced 45 percent over the past day, and Augur, which managed 34 percent.

While previously publishing pro-DOGE tweets, Musk’s latest entry builds on momentum which has bound him to the crypto world in recent months.

Specifically, since February, a community effort has sought to involve the Tesla CEO in Lightning Torch, a transaction relay on Bitcoin’s Lightning Network.

As Bitcoinist reported, the ongoing event has seen major publicity and participation from figures including Twitter’s CEO Jack Dorsey. Despite pleas, however, Musk has so far refrained from following suit.

Last September, Musk had recruited Dogecoin’s creator, Jackson Palmer, to help him combat the problem of scam bots infecting Twitter, a problem which persists for many.

Palmer provided Musk with a script, revealing they had held offline discussions about the issue.

“…We had a good chat on how (Dorsey) and the Twitter team should definitely automate and fix this problem on their end,” he tweeted.

What do you think about Elon Musk’s Dogecoin propaganda? Let us know in the comments below!