Just a few months after the CryptoKitty craze, China has jumped in on the fun; CryptoDogs has launched in China. Although it may just seem like another copycat (pun intended) concept, there are a few key differences – it isn’t based on Ethereum. Instead, it is based on another blockchain platform named Achain.

The Rise and Fall of CryptoKitties

CryptoKitties was launched back in December 2017, with the game immediately gaining huge popularity due to its implementation of blockchain technology in an easy-to-understand fashion. Think of the old Tamagotchis, but combined with Ethereum and the blockchain. Players could collect virtual cats by buying them and breeding them with each other. Each cat had its own unique “DNA” which determined a number of traits. From fur color to breeding time, each trait is determined by a “gene”, clearly encoded into the Ethereum blockchain.

The popularity attracted by this game was completely unprecedented; the transactions made by CryptoKitties caused a massive backlog on the Ethereum Network. Many people criticized the use of the Ethereum platform for a game like CryptoKitties since many found it ridiculous that people were paying up to $110,000 USD and congesting the network for virtual cats.

The game slowly lost its popularity and hype towards the end of 2017 – many players weren’t actually interested in playing the game. But instead, they were hoping to breed and resell cats at a nice profit. As a result of the rapidly growing transaction fees and the increased price of breeding cats, most players quit the game, causing the virtual cats to be priced at more reasonable figures. As of right now, the cheapest cat on the marketplace goes for 0.0021 Ether, just a little under $2 USD.

CryptoKitties never really took off in Asian markets such as China and Korea – the site is only available in English. Even though many in the Chinese community expressed their interest in playing a game, the language barrier simply prevented them from doing so.

However, CryptoDogs was just launched, targeting the Chinese market. The site is only available in Chinese, so users interested in experiencing this Chinese knockoff will have to use Google Translate or a similar tool in order to play. Nonetheless, those already familiar with CryptoKitties will find it very similar – the website is close to a complete copy, with the only notable difference being that instead of cats, you have dogs. This is the only notable difference; the other key difference is that the game isn’t based on Ethereum. Instead, it’s based on Achain.

Achain is a public blockchain platform that enables developers of all levels of experience to issue tokens, smart contracts, create applications and blockchain systems. It sounds just like Ethereum. However, it is based on a concept named “Fork Theory”; Achain allows developers to easily fork coins and tokens based on its platform. This means that instead of creating tokens like CryptoKitties on Ethereum, developers can easily fork the blockchain to produce a new coin; just like how Bitcoin Cash forked away from Bitcoin. 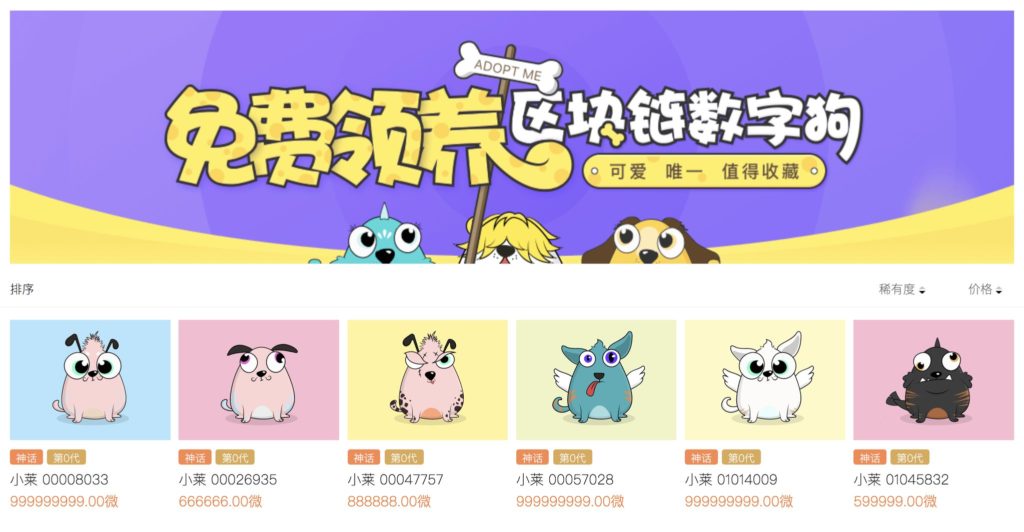 The fact that the new platform will have its own blockchain means that the original chain won’t be affected by congestion or spam on the secondary chain; there is no fear of a game overcrowding a billion-dollar network. Achain is also capable of processing 1000tx/s, compared to Ethereum’s measly 12tx/s. This transaction throughput, combined with the scalability and flexibility from easily creating forks, could become very useful in other applications, and not just games.

What do you think about CryptoDogs? Do you think that it is just another Chinese knockoff, or does it have any potential? Would you play the game? Let us know your thoughts below!