Yesterday XRP overtook Ethereum and claimed the #2 spot on CoinMarketCap. Is Bitcoin next?

It’s too early to determine whether the market has ‘recovered’ from yesterday’s unannounced slaughter. Despite this, analysts and savvy traders will be looking to see if any altcoins set a precedent by dislodging from the downturn caused by BCH and BTC. Perhaps as the BCH-ABC/BCH-SV civil hash war wraps up we’ll see a new leader emerge from the chaos?

While XRP did take a knock during yesterday’s pullback, it wasn’t as extreme as BTC [coin_price], and we feel like this warrants further inspection. XRP turned bearish, but it remains better situated when compared to its contemporaries. Bitcoin appears to be consolidating under $6,000 and perhaps a market-wide oversold bounce could bring the cryptocurrency and its neighbors above the most recently notched yearly lows. What is interesting, however, is XRP’s possible dislodging from BTC. 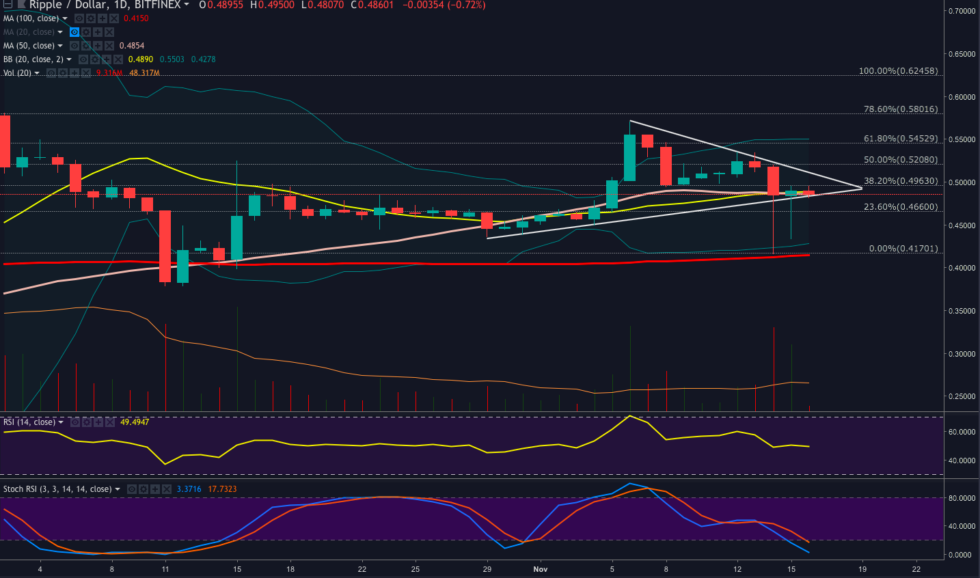 Last week XRP moved above an important barrier at $0.50 and topped out slightly above $0.55. This was a significant achievement considering that XRP had been stuck in the $0.40s for about 18-days. In mid-September, XRP traded near $0.26 and a slew of frequent partnerships, adoption announcements and possible accumulation by institutional partners appear to be supporting the gradual price increase.

It’s clear that XRP followed the general direction of the market and sharply declined from $0.51. There are support levels at $0.460 $0.44 and $0.40, as well as former supports at $0.50 $0.486 now acting as resistance. XRP spent the day consolidating toward the 23.6% Fib retracement level at $0.46 and the 50% Fib level has served as a rejection point. The current outlook remains bearish but, given the strength of the mid $0.40s supports, an entry near $0.41 to $0.43 could possibly turn a quick profit if the market bounces back over the next week.

Stoch and RSI still angled down with the Stoch dipping into oversold territory. Given the oversold state of the entire market, this setup appears less extreme when compared to BTC and ETH. XRP appears to be dislodging from BTC and analysts are already attempting to determine which tokens will lead the market forward in the event of continued malaise from Bitcoin.

Regardless of one’s personal philosophy regarding centralization and decentralization, Ripple has held fairly steady while other tokens were crushed during this week’s surprise correction. Day traders will probably find the $0.43 to $0.50 range quite lucrative.

[Disclaimer: The views expressed in this article are not intended as investment advice. Market data is provided by Bitfinex. The charts for analysis are provided by TradingView.]