Russian economist, Vladislav Ginko, says Russia is looking to invest $10 billion in Bitcoin as the State Duma has put cryptocurrency legislation high on the agenda for 2019.

Ginko, an economist with ties to the Kremlin, says the Russian government will convert some of its USD reserves into Bitcoin, a move that could start as early as February.

Last week, Bitcoinist first reported on the government’s rumored plans to ditch the Dollar as a way of circumventing U.S. sanctions.

Now, according to The Telegraph, the Kremlin plans to invest as much as $10 billion into Bitcoin, citing Ginko, who added:

[The] Russian government is about to make a step to start diversifying financial reserves into Bitcoin since Russia [is] forced by US sanctions to dump US Treasury bonds and [take] back US dollars.

“These sanctions and the will to adopt modern financial technologies lead Russia to the way of investing its reserves into Bitcoin.

The economist also believes cryptocurrency-related activity now comprises as much as 8 percent of the country’s GDP. What’s more, Ginko expects Russia to also create an intermediary ‘Bitruble,’ which it will trade for bitcoin.

“The proposal that I understand is on the desk of the finance minister at the moment is to create some sort of intermediary cryptocurrency,” commented Mati Greenspan, Senior Market Analyst at eToro, in reaction to the news.

We know that Vladimir Putin is a big advocate of blockchain technology. Obviously he doesn’t like the sanctions that have been placed on him, and he’s already said that these types of sanctions are going to lead to de-dollarization. This is more or less the direction the Russian government is going.

Cryptocurrency Regulations High on the Agenda

Greenspan also adds that “the only thing holding the country back is the legal framework to do so.”

Interestingly, fuelling the aforementioned rumors are new reports that Russian lawmakers are looking to prioritize creating a legal foundation for the cryptocurrency market this year.

According to Alexander Zhukov, the First Deputy Chairman of the State Duma, cryptocurrency regulations are a primary focus of legislative work for 2019. An excerpt from a recent article on the official State Duma website reads:

Among the priorities of parliamentary work in the spring session are issues of the development of the digital economy, bills aimed at improving the anti-corruption legislation, as well as amendments that will strengthen the fight against financial scammers. 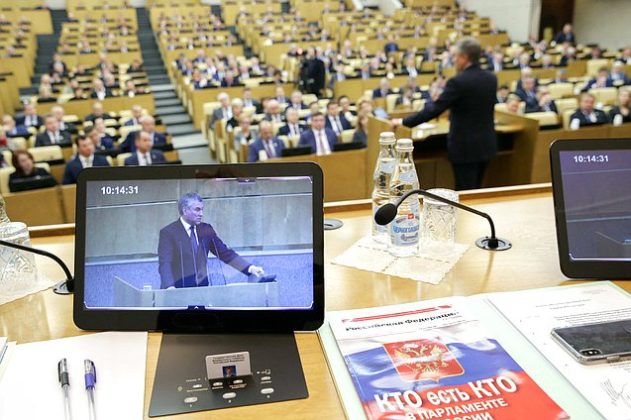 Apart from being one of the focus points for the Spring Session of the State Duma, matters relating to the cryptocurrency industry will also receive special attention.

According to Zhukov, the Chairman of the State Duma, Vyacheslav Volodin has mandated that special attention is paid to draft laws towards the development of the digital economy.

Despite several efforts, the country’s legislature was unable to pass any cryptocurrency legislation in 2018. Even with the apparent urging of President Vladimir Putin, the State Duma didn’t pass the “On Digital Financial Assets” bill.

With these new declarations from high-ranking members of the Russian Parliament, the country might finally be on the path of obtaining clear-cut regulations for the industry. Speaking during the opening plenary meeting, Volodin urged lawmakers to push beyond “legislative blockages” and focus on passing and enforcing laws.

What impact do you think a $10 billion investment by Russia would have on the price of Bitcoin? Let us know your thoughts in the comments below.