This year has been off to a shaky start. While 2017 was a record year, 2018 has barely lived up to its hype thus far. It’s not entirely hard to see why: one can simply look at the overall market charts for 2017 and see the extreme parabolic run, which eventually had to come to an end.

Much of the price appreciation is being attributed to premiums and arbitrages across different exchanges in different geographies. For example, the “kimchi Premium”, that was realized on cryptocurrency prices on exchanges in South Korea during the greater portion of 2017, which helped to cause excitement and bring more buys to different coins at different times. The arbitrage opportunities also created new volume and helped bring the price appreciations to stable levels and thus reality.

In traditional currency and asset exchanges, this doesn’t happen very much. As assets and currencies aren’t as intertwined globally. Or when they are, as in the case of ForEx, the trading fluctuations aren’t as vast or easily definable by normal people, and many opportunities go overlooked or are passed up by the majority of global investors or speculators. The ease of access and liquidity of cryptocurrency exchanges is revolutionizing free trade of currencies and assets. One project to take it a step further is OptiToken.io. OptiToken is arguing that the economics available currently in cryptocurrency and tokenization are revolutionary, and render traditional currency exchange and transfer mechanisms archaic. 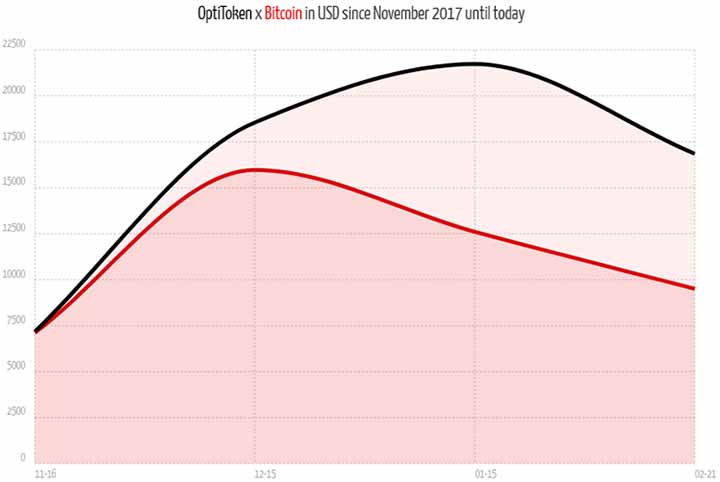 In a given basket of solid and established cryptocurrencies, one can typically find a series of price swings. Cryptocurrency is still in its infancy, it’s liquidity and 24-hour clock makes for constant peaks and valleys. If you study a given set of coins, those with consistent development and a hard-working community, you will find that there are swings which can produce regular opportunities to “squeeze profits” if traded properly. Think whack-a-mole, the idea is to sell on these peaks, not chase the mob and buy when a coin starts moving. Scalping and swing trading is quite common and for good reason.

A lot of traders make plenty of extra money on top of their standard core portfolio without needing to necessarily sell what they have to do so. In certain geo’s this type of operation could be problematic, but not for OptiToken who is a Cayman Island Exempt Corporation, meaning there’s literally $0 tax owed on these otherwise taxable trades in and out of positions. Tax liability and the lack of ability to implement strategies like 1031 like-kind exchanges to off-set these taxable events often cause people to realize the most optimal strategy by simply holding long-term meaning many opportunities must go to waste.

The nature of trades for OptiToken theoretically allows an opportunity to consistently close or exchange positions and account gains. When profitable events occur, the profit is immediately split into 2 parts. 84% is reinvested in the portfolio, while 16% is converted to BTC or ETH and used as direct buy pressure to purchase $OPTI on any exchange it is listed on. Their team recently blogged that, “they won’t entertain sketchy exchanges, they can list us if they want but they shouldn’t expect us to perform operations on their exchange necessarily.” So what exchanges to use? Exchange(s) with strong security, transparent management, and accounting and with sufficient user base. The team says, “exchanges will be openly announced upfront before the fact of course.”

This part of the operation can best be compared to a stock buy-back, or, for currencies, a stark rise in interest rates. This operation is price positive, except Opti offers an extra benefit. Instead of just keeping the bought tokens, they will all be sent to a publicly viewable unspendable address and destroyed. Also known sometimes as “blackhole addresses” this is a provably unspendable address utilized solely for burning tokens. Another benefit of cryptocurrency is that these “black hole addresses” are viewable on block explorers, adding a further element of public accounting transparency.

This is a first, it’s possible the project could hit road bumps. It’s also possible it could be responsible for the largest case of FOMO ever, upon opening. There’s no way to know as of now and we’ll just have to wait and see. I know for me I have my popcorn ready. The project is closed to residents of the U.S., China and Cayman Islands, but all other interested people can learn more here or register for their ICO starting April 1st at OptiToken.io or on Telegram.

Will algorithmic trading and a “hyper-deflationary cryptocurrency” like OptiToken lower the barrier of entry into crypto trading for newcomers? Let us know what you think in the comments below.