This Tiny Altcoin Proves There’s Light at the End of the Crypto Tunnel!

The bullish cryptocurrency year of 2017 has attracted a vast range of worldwide projects and attention. Now that this industry has a $300+ Billion market capitalization, there’s one question growing larger with economists and tech watchers: What is the real economic value of these Blockchain startups and how will they make an actual impact on our lives? How will they perform over time and will they manage to keep up with the promises they made during their ICOs?

These burning questions cannot be answered with discussions. They can be answered with actual product usage and roadmap execution. Knowing when a project falls short with those is critical for safeguarding your investments throughout the bumpy 2018.

We’ve already seen a lot of projects in the crypto space completely implode, which further increased the level of skepticism among investors and validated that the level of success of an ICO should not be confused with the amount of money that the same ICO had managed to raise, as the latter is by no means any guarantee for a good return on your investment.

Vitalik Buterin himself (the mastermind behind Ethereum) has stated:

In between all these blockchain companies and all the skepticism that the current bearish market is experiencing, it looks like there’s one running at the front that can actually already make an impact on our everyday lives – and its name is LockChain.co.

Locking onto your Hotel on the Chain

Simply put, LockChain.co is an online booking platform for hotels and properties. Much like other booking sites that today’s travelers use, they have their booking platform (which is currently up and running in alpha) connecting hotels and properties to guests looking for a stay somewhere. What makes LockChain unique is their ability to offer this service to the end customer for 20% cheaper on average compared to other large booking websites. How? Simply put, LockChain doesn’t take any commission on their booking. Where regular booking sites take anywhere from 15% to 35% commission and other additional fees, LockChain connects the hoteliers and property owners to consumers directly without any middle-man, by leveraging Blockchain technology capabilities and by utilizing a true shared economy. 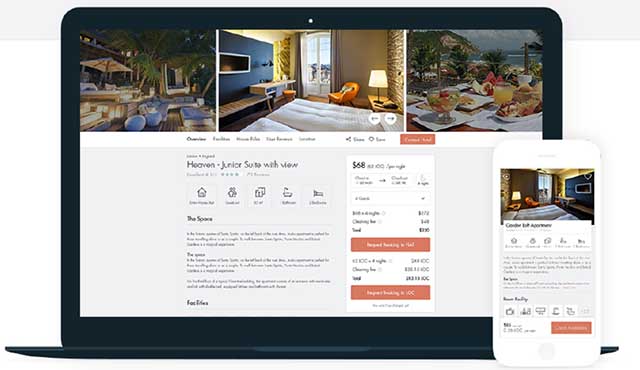 They just announced that they’ve launched a 100,000 hotels deployment with global coverage which are fully available for booking.

This essentially means that any human being that is interested in traveling from now on, can save up to 30% on future travel expenses without the necessity of changing his consumer behavior.

The value proposition is obvious: Cut commissions so travelers can travel cheaper while hoteliers and property owners get more profit. According to research, most travelers compare prices across platforms to pick their hotel or property of choice on the right price. Half of those stumble upon a website they’ve not been acquainted to prior. For your next booking, that can be Lockchain, and you would still end up in the same hotel that you wanted to go to.

More importantly, LockChain is not small a player in the online bookings field: They’ve secured over 100,000 hotels with global coverage for their marketplace, which are already live and ready to be booked, and there’s a nicely growing index of properties to be found there, too. Now and then property owners and organizations go into their Telegram channel to raise questions regarding a listing or possible partnership. Of course, most of those communications go behind the scenes, but LockChain seems especially interested to answer all of the community’s questions and interests – as long as their business practice is maintained.

Customer-centric Strategy with Near 0% Dependency on Third-parties

The other great thing about LockChain is that they have a strategy where they cut down third-party dependency to near zero. Unlike most other projects that are developing “protocols” or complex b2b technologies without clear idea of how and when the retail adoption will take place, LockChain seems to take care of the whole vertical – building the underlying Blockchain engine together with a centralized application that can immediately provide the service to their users and to all users in general.

This essentially means doubling the amount of work in order to ensure retail utility of the end product as soon as possible.

We have a 100% focus on providing a retail service that can make an impact on our everyday lives, without asking the users to make any changes to their current consumer behavior. Our first goal is to make sure the investors love our service and they start to use it. If we can make it work for 5,000 people, then there’s no reason not to make it work for millions of people afterwards. Our goal was never to raise too much money during the ICO, but rather, to build an innovative and yet accessible service of maximum value. That value could easily multiply over time with the right strategy.

A Blockchain App for the Long Run

LockChain (LOC token), currently having a market capitalization of only $10 Million according to Coinmarketcap contrasts with many of the Top 100 Multi-Billion Dollar valuated crypto projects. Some of those don’t even have a basic wallet to support their tokens and completely depend on third parties for the execution of their road-map.

Now after LockChain have implemented the 100,000 hotels and wallet capabilities into their marketplace, they’re focussing on a payment process where users can pay with fiat as well. The fiat payments would be converted into LOC as a background process through API connectivity with exchanges, which would make it a win-win scenario for both non-crypto and crypto users.

The CEO, Nikola, stated that he expects this to occur within the next 2-3 months. Once that is in place, the marketplace will be truly consumer ready and there will be no stopping back for the growth towards its real $550 Billion travel industry potential.

Several investors online are talking about LockChain being the underdog that you must watch and they might be right: with a small market cap and being up over 300% since their ICO, LockChain is one of the few altcoins that is remaining stable in a competitive and harsh market. It’ll be an interesting jump for them the next couple of weeks when the hotels are fully deployed.

Their mobile apps for Android and iOS are also almost completed and are scheduled to be launched within the next 2 months.

Further in these couple of months when features will be added they are only a few steps away from official public launch. With their new advisor on board, it also seems they are aiming to be listed on more prominent exchanges. While they’re currently only on a handful of exchanges, the most interesting being HitBTC, it can prove to be a good moment to step in the LockChain game before they reach a wider audience.

LockChain is run by two individuals at the top: Nikola Alexandrov (CEO) and Hristo Tenchev (COO). They both are award-winning entrepreneurs with extensive knowledge in internet start-ups and in the Blockchain industry. They’re supported by a large team of developers that Nikola and Hristo have acquired through years of running IT projects. Furthermore, they’re supported by some serious specialists.

Nevena Petrova is head of Development, who prior to LockChain worked with Nikola on Bitcoin7 which was a well-known and established bitcoin exchange back in its time. Harold Kim is an Advisor who prior to LockChain was involved in getting serious projects listed on large exchanges. Then, not the very least, is the former president of Bulgaria Rosen Plevneliev as Chief Advisor. Rosen advises LockChain on strategic developments. Check out their entire team on their website.

The LOC token has a circulation of only 9.3 Million and a total supply of 18.6Million (which is with 3 Million less than Bitcoin).

LOC is priced at around $1.10 at the time of writing this article and is already tradeable at HitBTC, Yobit, Mercatox, IDEX, and Gatecoin.

What are your thoughts on LockChain – both as a cryptocurrency and as a hotel platform? What are the biggest benefits that the platform offers to travelers? Let us know what you think in the comments below.