This year will be a huge once for initial coin offerings and they are coming thick and fast in January. Some will succeed and make it into the crypto hall of fame, otherwise known as the market capacity charts, and others will fall by the wayside. One ICO that has already successfully completed and is on the way to the exchanges is trade.io.

trade.io is a blockchain based trading platform which aims to democratize the markets, disrupt the financial industry, and recapture and redistribute wealth back to investors and companies. This will have the beneficial effect of reducing and eliminating the often disproportionate fees and inefficiencies traditionally associated with asset trading. It will be achieved through the creation of an innovative peer-to-peer shared liquidity pool where the profits get redistributed back to the customers.

Early adopters were impressed with the product and the ICO, which was launched on December 7, has now been concluded. It has been a complete success with the company raising $31,169,749 from 15,073 participants who purchased 65,782,147 Trade Tokens, or TIO. The primary ICO milestones were all achieved, which included a soft cap of $5 million, a further $10 million to strengthen the liquidity pool, and $30 million for the blockchain exchange creation.

Further ongoing developments include the creation of compliant smart contracts, the acquisition of a Swiss banking license and an alternative trading system, and further strengthening of the liquidity pool. According to the roadmap, the trade.io exchange will be launched in April 2018 with further integration including MT4 starting with FXPRIMUS and Primus Capital Markets coming in August 2018.

One of the next steps after a successful ICO is to get the tokens listed on some of the popular exchanges and trade.io are already ahead of the game. Their TIO tokens are already listed on OKEx and will be coming to HitBTC in the next couple of days. European-based HitBTC is the eleventh largest exchange in the world with a daily trade volume of $780 million. It was launched in 2013 and has hundreds of cryptocurrencies listed for trade.

OKEx is even larger with over $2 billion in daily volume. The exchange is based in Belize with its main operations hub located in Hong Kong. TIO will be listed on January 11 and offered in three pairs trading with Bitcoin, Ethereum, and the dollar-pegged coin Tether. A 100,000 token airdrop is also planned for the coming week or two.

The talented developers at trade.io have been hard at work on a revolutionary blockchain-based trade verification dapp. Blockchain Trade Verifier (BTV) is a semi-decentralized application that provides a way for clients to be sure that the data being displayed by their broker hasn’t been tampered with.

BTV is displayed via a proprietary dashboard and can use data from any asset class on any trading platform. It utilizes IPFS and Ethereum blockchain-based smart contracts to validate the data.

The scheduled release date for BTV is Tuesday, January 29 and it is already slated for adoption by Primus Global Ltd. and Primus Capital Markets UK Ltd. More information about BTV can be found on trade.io’s website. 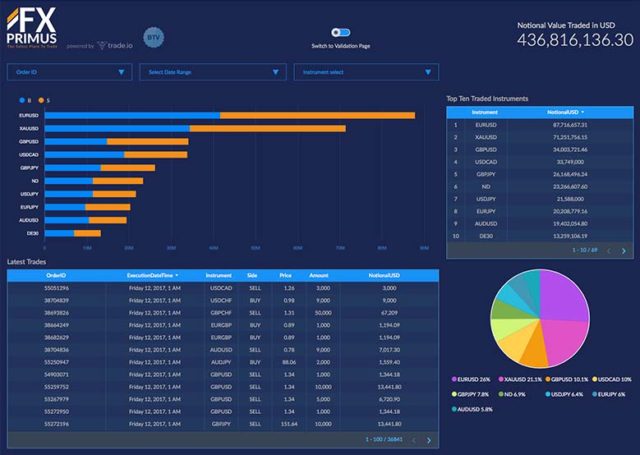 A number of partnerships have already been announced including a pairing with the University of Nicosia. It is one of the first academic institutions to take the bold step of introducing blockchain courses, even offering a fully accredited MSc degree in Digital Currency. The college continues to pioneer innovations in the blockchain academic field and trade.io have committed to sponsoring two post-doctoral research positions at the University. The two researchers will work on sidechains, cross-chain interoperability, and smart token corporate governance best practices and implementation.

trade.io will essentially be providing the funding and salary for the two scholars to undertake detailed research on these subjects for a minimum of two years. The college will manage the recruitment process for the researchers and will provide the equipment, support, and environment in which they will be working.

In further news, Chinese-American billionaire and majority shareholder of French soccer club OGC Nice, Chien Lee, has joined the trade.io team in defiance of China’s ICO ban. Lee, who has also invested in the company, joins the board of directors in addition to being the CEO of private equity firm NewCity Capital, and the co-founder of 7 Days Group, which is one of China’s largest budget hotel chains.

trade.io CEO Jim Preissler is upbeat about the situation and told media:

Obviously, the bans in China and South Korea have impacted the ICO landscape, but our view is that this is somewhat healthy, in that it will give them time to evaluate the entire industry and weed out the good ICOs from the bad.

With a number of Asian nations demanding more regulation it is ironic that the trade.io platform actually provides a form of control through the immutable distributed ledger that powers it. TIO tokens will be ones to watch out for when they hit the exchanges this week, revolutionizing digital trading and redistributing the wealth will appeal to all investors.

Did you participate in the trade.io ICO? What are your thoughts on the platform and its contributions to blockchain education? Let us know in the comments below.