What is blockchain interoperability: A beginner’s guide to cross-chain technology

by admin
in Blockchain101
0

What is blockchain interoperability?

Today, blockchains are recognized as a potentially revolutionary technology in many different industries such as supply chain tracking and healthcare, in addition to serving as the foundational technology for cryptocurrencies like Bitcoin (BTC). The enormous interest in blockchain technology has sparked various research and development initiatives.

As a result, there is a lot of fragmentation in the blockchain industry, and customers can choose from multiple incompatible technologies. Nonetheless, functionalities like transmitting tokens from one participant to another and executing smart contracts can only be carried out within a single blockchain because interoperability between several blockchains is typically not anticipated in existing protocols and standards.

The concept of a trustless cryptocurrency exchange, achieved in the form of atomic cross-chain swaps, also known as atomic swaps, is one of the earliest contributions to the field of blockchain interoperability. Using atomic swaps, users of various cryptocurrencies can exchange their assets in a trustless and atomic way. Atomic swaps, however, do not permit the transfer of a token from one blockchain to another in the sense that a specific amount of assets is destroyed on the source blockchain, and the same amount is (re)created on the destination blockchain.

Atomic swaps, as its name suggests, allow for token exchanges across blockchain boundaries rather than transfers. This implies that atomic swaps always require a counterparty ready to trade tokens. Online markets provide a back door for exchanging tokens. To date, however, this has required the existence of a reliable, centralized body, which runs opposite to blockchain’s decentralized nature. As a result, cross-chain technology is rapidly being discussed as the best way to improve interoperability between blockchains.

What is cross-chain technology?

The capacity of a distributed ledger technology (DLT) design to get data from or exchange data with external systems is referred to as interoperability. Cross-chain technology facilitates data interchange among DLT designs or external systems, which aids in achieving interoperability. Such data exchanges can improve the security of DLT designs, boost flexibility, and resolve performance difficulties.

Sharding, for instance, can be used to address issues with low throughput and poor scalability. In sharding, a distributed ledger is divided into tiny chunks that may be controlled separately, allowing for parallel transaction processing to boost performance and scalability.

At this point, some question who is leveraging cross-chain technology. An example of a blockchain project attempting to investigate cross-chain transactions is Ripple. Ripple assists banks worldwide in settling cross-border payments using fiat currencies and cryptocurrencies.

How does blockchain interoperability work?

However, it varies from network to network since no single predetermined approach can be implemented in the same way in all networks. To facilitate transactions without using third-party interfaces, each network utilizes a unique method for blockchain interoperability. 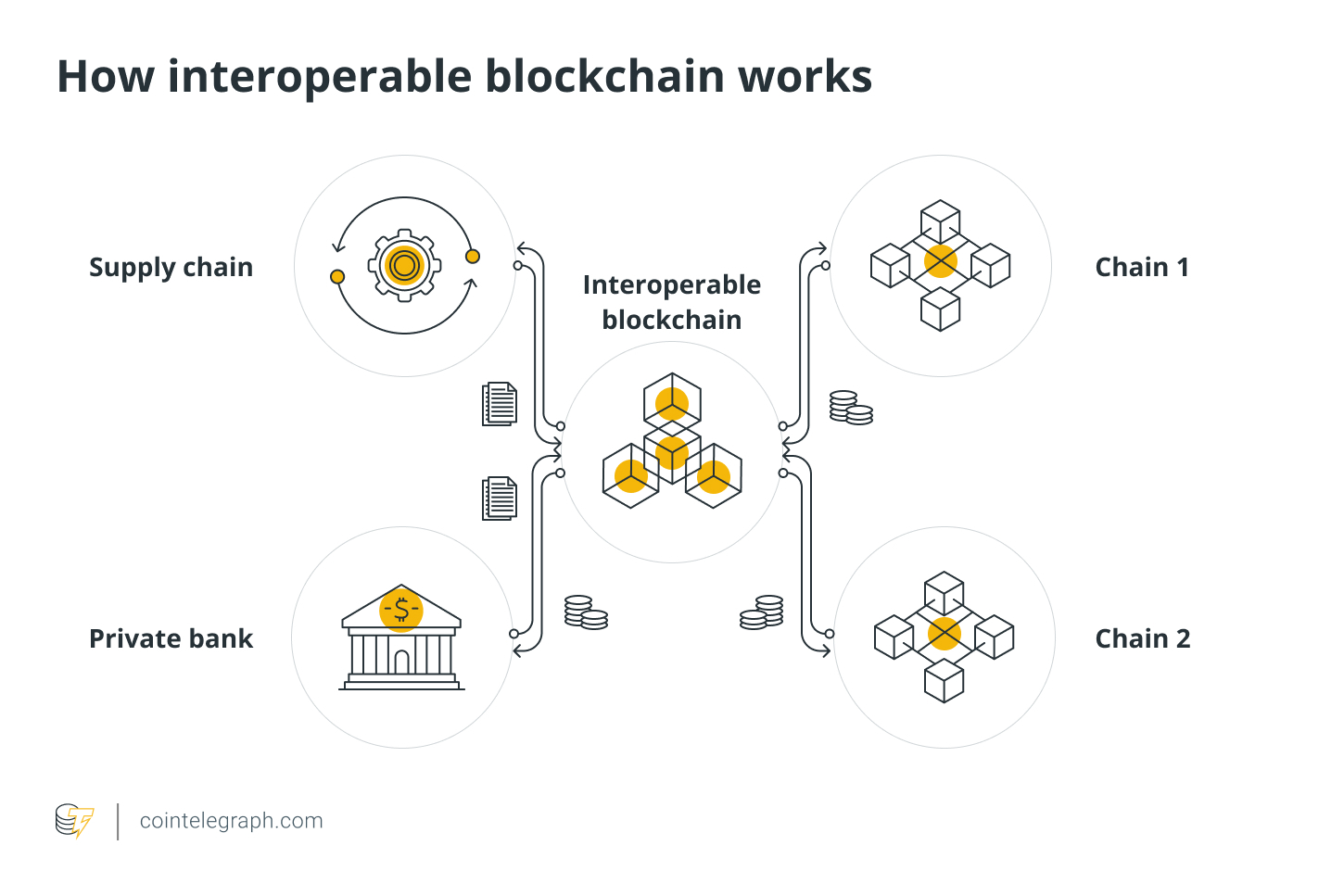 As mentioned, atomic swaps let two parties exchange their tokens across several blockchains. In addition, blockchain networks can monitor the activities occurring on other chains thanks to relays. They operate on a chain-to-chain basis, allowing a single contract to serve as a central client of other nodes across many chains without using distributed nodes. This allows it to instantly validate specific central headers and the entire history of transactions. However, operating and maintaining the security of the relay approach costs a lot of money.

Why is blockchain interoperability important?

Interoperability concerning blockchain technology aids in resolving the issue of assets and data interacting across several chains. When two parties utilize the same blockchain platform, such as Bitcoin, exchanging data and value digitally is a simple process. However, the same is not possible when the parties use different blockchain platforms.

Indeed, the digital transfer process is made significantly more difficult because the companies using blockchain technology worldwide operate inside a wide range of blockchain networks. However, interoperability is projected to substantially reduce such issues, making it much easier for parties to transact across blockchains and enjoy the benefits of blockchain interoperability.

How is blockchain interoperability achieved?

Most layer-1 blockchains lack internal capabilities that facilitate cross-chain interoperability. However, as discussed below, several techniques are being used to raise the amount of interoperability between blockchain networks.

With a mechanism for transferring assets between the main chain and sidechain, sidechains function as a two-way peg. Mimblewimble, BTC Relay, Poa network and RSK are examples of blockchain interoperability projects.

Transactions under this method rely on a third-party notary. A trusted exchange known as a notary manages the lack of trust between the two parties to the transaction. The notary may be a network of exchanges or a controlled exchange. The notary’s integrity is the only factor affecting how well a notary scheme works.

In addition, the scheme contains a centralized component, even if a collection of notaries decentralizes it, which is another flaw in the scheme. Centralized cryptocurrency exchanges like Coinbase and Binance are examples of notary schemes.

Oracles fill the informational gap between on-chain and off-chain settings in the context of blockchain technology. By ensuring that multiple ecosystems are referring to a single source of truth, decentralized oracle services like Chainlink help to ensure that off-chain data is fed to blockchain-enabled smart contracts.

Polkadot and Cosmos blockchains are examples of cross-chain interoperability protocols. A heterogeneous multichain translation system called Polkadot enables specialized sidechains to communicate with open blockchains. On the contrary, blockchains can be created using Cosmos with or without permission. Cosmos consists of hubs and zones that use the inter-blockchain protocol to communicate with each other.

Hashed TimeLock Contract (HTLC) is also among blockchain interoperability solutions used to build smart contracts with the ability to modify payment channels. In the crypto space, an HTLC essentially implements time-bound transactions. The recipient will not receive any money, and the transaction is void if they fail to produce a cryptographic proof of receipt of payment within a defined window. TimeLock indicates that a specific number of cryptocurrencies will be blocked from use until a given or predetermined time has passed.

Benefits and challenges of blockchain interoperability

Cross-blockchain compatibility offers many benefits. For instance, with interoperable smart contracts, industries like law and healthcare can exchange data between private and public blockchains, assisting in creating Web3 platforms that were impossible before. The potential availability of multi-token transactions and wallet systems may also be made possible via blockchain interoperability, dramatically streamlining the cryptocurrency user experience.

Due to blockchain interoperability, application-specific blockchains can communicate with one another via the central decentralized hub. Additionally, independent businesses, once thought to be completely separate, will be able to more readily transfer data and value if blockchains utilized by various companies and industries can connect with each other.

However, a blockchain that has been registered on a network is immutable. Therefore, checking the data before submitting a starting node is necessary. Furthermore, blockchain interoperability is a highly constrained procedure. Although this feature ensures data security during transfer, nothing can be guaranteed in a technology-driven world.

Additionally, every blockchain ledger has a different trust model. Some are supported by hundred miners, while others are supported by just two. Transferring information from a less reliable ledger to one that is more reliable can leave the more robust blockchain open to manipulation by outside parties and other inconsistencies.

The future of blockchain interoperability

For widespread use, commercial systems like Cosmos and Polkadot need more stability. Even if a couple of these efforts succeed in the future and are adopted, it will be unclear how they can work together. As a result, there is a higher demand for standards, APIs and related technologies enabling extensive blockchain platform interoperability.

In addition, many nations do not recognize the legality of the cryptocurrency ecosystem. Therefore, support from the regulatory framework is necessary for interchain interoperability’s future applications. Furthermore, adequate legal and regulatory procedures for cryptocurrencies and interoperability methods are needed for transactions primarily geared toward the financial and related industries.

A beginner’s guide to the zkSync ecosystem

What’s the difference between blockchain layers L0 and L1?

What is a phishing attack in crypto, and how to prevent it?

What is TRON (TRX) and how does it work? A beginner’s guide

What is Cosmos: A beginner’s guide to the ‘Internet of Blockchains’