by admin
in Blockchain101
0

Buying and mining are the two ways to gain cryptocurrency. One can buy crypto using cryptocurrency exchanges like Binance and Coinbase. On the other hand, miners can earn crypto as a reward through the cryptocurrency mining process by solving a mathematical problem.

As cryptocurrencies operate using a distributed ledger called blockchain, the digital database is updated with data on each transaction since the previous update. Blocks are produced when individuals called miners supply the computer power to get rewarded.

Nonetheless, as mining involves massive electricity usage and expensive equipment, attackers worldwide try to exploit malicious scripts to gain cryptocurrency without spending a penny. This type of cybercrime is called cryptojacking, which is a combination of two words: cryptocurrency and hijacking.

This article will explain the various types of cryptojacking, how cryptojacking works and how to detect and prevent malicious crypto mining.

How does cryptojacking work?

Hackers or cyber criminals inject cryptojacking software into victims’ devices during coin mining or to steal crypto from cryptocurrency wallets. A malicious crypto mining code is inserted into the unsuspecting victims’ devices through a malicious link sent in a phishing email.

Alternatively, intruders insert JavaScript code into a website or online advertisement that automatically runs when loaded by the victim’s browser. In each instance, the victim works while the code installs the cryptojacking script into the device and lets it run in the background.

Regardless of the technique, the script executes complicated mathematical operations on the victims’ computers and transmits the results to a server under the hacker’s control without compromising the device’s data. They do, however, steal processing power from computers.

Slower computer performance may only be an issue for some users. Nonetheless, businesses incur costs like high electricity charges and IT maintenance costs. Also, other computing resources can be infected due to the worming capabilities of crypto mining scripts. These scripts might also scan to detect if any other crypto mining malware has already infiltrated the system. The script stops another crypto miner if it is found.

Initially, cryptojackers used JavaScript code to mine the cryptocurrency while providing free content to the users. This strategy may be successful if websites are open about their operations and as long as the user remains on that website. The challenge for users is determining if websites are being truthful.

On the other hand, malicious cryptojacking is undertaken through compromised legitimate sites and keeps running even after users leave the website. The fact that a website a user visited was using their computer to mine cryptocurrency is unknown to the user. A secret browser window remains open as a pop-up behind the clock or beneath the taskbar while the visible windows are closed. The usage of system resources by the code helps prevent the detection of the script.

Android mobile devices can also be exploited by cryptojacking miners through a Trojan horse virus or redirecting users to infected websites. A Trojan horse virus is malware that installs itself on a computer by impersonating a trustworthy application using social engineering methods like phishing to obtain access to users’ systems.

What are the various types of cryptojacking?

Using IT infrastructure to inject malware within a browser is called browser-based cryptojacking. For instance, hackers use a programming language to construct a crypto mining script, which they insert into various websites. The user’s computer downloads the script’s code, which is automatically executed via advertising and outdated or vulnerably coded WordPress plugins, resulting in cryptojacking.

Because of their popularity and the length of time that users spend on those websites, YouTube and other media content providers are excellent targets for attackers. For instance, YouTube’s Google ad packages were combined with cryptojacking malware. As long as users remained on the relevant page, the compromised advertising package that the victims’ host had assembled engaged in illegal mining. Similarly, malware used for cryptojacking was discovered in a plugin made available by the U.K. government.

File-based cryptojacking occurs through malicious emails that look legitimate but, when clicked, run the crypto mining code without the user’s knowledge. In contrast to file-based cryptojacking malware, cloud-based malware is installed on the host system to access the victim’s computing resources. As a result, they are typically transmitted to the host system utilizing techniques such as being embedded in third-party software and exploiting weaknesses.

When hackers utilize the cloud or host-based cryptojacking, they trawl through a company’s documents and source code in search of application programming interface (API) keys to access their cloud services. Once in, hackers use unrestricted central processing usage (CPU) resources for crypto mining, which raises account charges while mining cryptocurrencies without authorization. 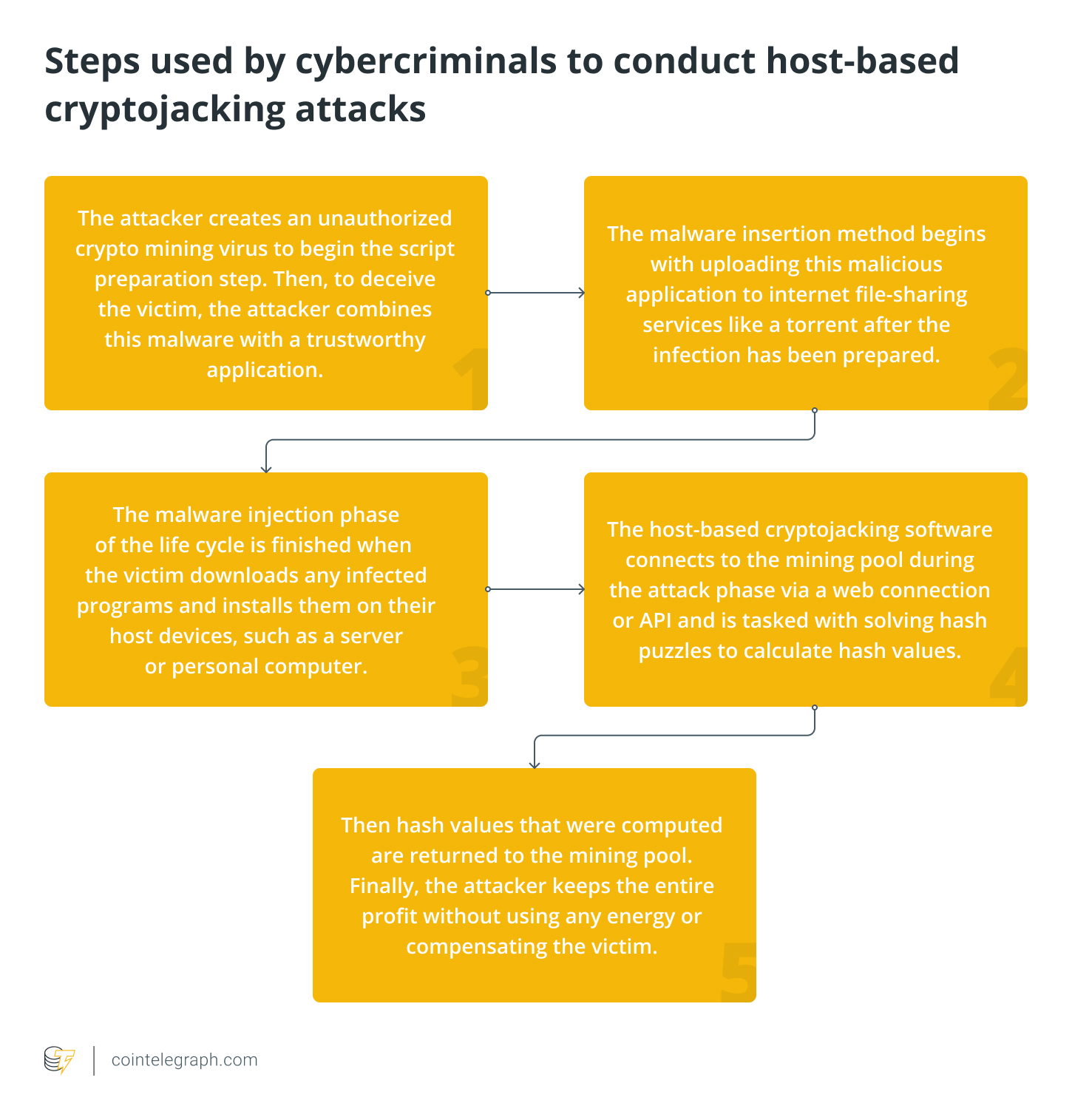 The attacker has three possibilities for using the revenue once they have received all of it in cryptocurrencies from the service provider: using cryptocurrency mixing services to hide its traces, converting to fiat money using exchanges or peer-to-peer transactions and using it as a digital currency for a service.

What are the sources of cryptojacking malware?

Service providers are the primary developers and sellers of cryptojacking programs. For instance, to give website and content owners a secondary source of income in 2017, Coinhive was the first service provider to offer a ready-to-use in-browser mining script, which quickly gained popularity among attackers. Cybercriminals held a sizable portion of the overall Monero (XMR) hash rate when Coinhive was in operation. However, Monero’s owners shut down Coinhive in March 2019 due to the rapid decline in the price of XMR and the company’s declining profitability.

Attackers have been known to take advantage of many hardware and software flaws. For example, cybercriminals infect faulty computers with mining malware and force them to mine cryptocurrencies. Other cryptojacking examples include the discovery of cryptojacking code buried within the Homicide Report page of the Los Angeles Times in 2018. Visitors’ devices were used to mine Monero (XMR) cryptocurrency without authorization. Additionally, over 200,000 MikroTik routers in Brazil were compromised by a cryptojacking assault that injected the CoinHive code into significant web traffic between July and August 2018.

Additionally, numerous mining pools offer several plug-and-play mining solutions, which attackers can modify for cryptojacking. For instance, XMRig is an open-source, high-performance Monero miner implementation whose signature is present in some of the damaging assaults that affect millions of end devices globally.

How to detect cryptojacking

Given the pervasive and developing nature of cryptojacking malware, it is critical to identify and stop unauthorized mining operations from misusing the computational resources of any computing platform without the users’ knowledge or agreement. Although crucial, cryptojacking detection is not easy because cryptojacking differs from conventional malware in several ways. Being vigilant and watching for the possible signs, as mentioned below, may help you catch it.

How to protect yourself from cryptojacking attacks

As precaution is better than cure, one can protect themselves from cryptojacking with an awareness of the latest crypto mining malware trends. Understanding the modern cybersecurity threats may help you detect and avoid cryptojacking.

Cryptojacking blockers can be used to detect and block malicious malware code. Similarly, Ad Blocker Plus can prevent cryptojacking taking place via online ads. Additionally, one can install cybersecurity programs like Kaspersky Total Security to avoid becoming a victim of crypto mining malware.

Installing the most recent updates for your software, operating system, and apps is also recommended, particularly for online browsers. Furthermore, JavaScript should be disabled when accessing the internet to prevent your machine from becoming infected with cryptojacking software. However, it may prevent you from using the necessary functions.

It is also a good practice to search for cryptojacking sites and blacklist them while surfing the web. However, new crypto mining malware sites can still infect your device. You may want to install internet security software to prevent cryptojacking and the subsequent malfunctioning of your computer or cell phone.

Purchase a licence for this article. Powered by SharpShark.

What is blockchain interoperability: A beginner’s guide to cross-chain technology

A beginner’s guide to the zkSync ecosystem

What’s the difference between blockchain layers L0 and L1?

What is a phishing attack in crypto, and how to prevent it?

What is TRON (TRX) and how does it work? A beginner’s guide

What is Cosmos: A beginner’s guide to the ‘Internet of Blockchains’